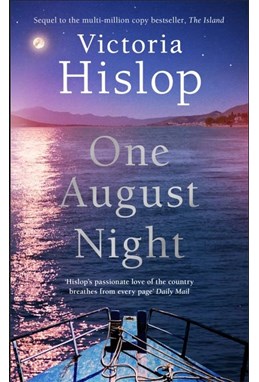 DKK 169.00 inkl. moms
DKK 135.20 ekskl. moms
ISBN:
9781472278418
Sprog:
Engelsk
Indbinding:
Paperback
Sideantal:
240
Forlag:
Headline Review
Udgivelsesdato:
29-10-2020
Udgivelsesår:
2020
Udgivelsesland:
Storbritannien
BESKRIVELSE:
Beloved author Victoria Hislop returns to Crete in this long-anticipated sequel to her multi-million-copy Number One bestseller, The Island! - 25th August 1957. The island of Spinalonga closes its leper colony. And a moment of violence has devastating consequences. When time stops dead for Maria Petrakis and her sister, Anna, two families splinter apart and, for the people of Plaka, the closure of Spinalonga is forever coloured with tragedy. In the aftermath, the question of how to resume life looms large. Stigma and scandal need to be confronted and somehow, for those impacted, a future built from the ruins of the past. Number one bestselling author Victoria Hislop returns to the world and characters she created in The Island - the award-winning novel that remains one of the biggest selling reading group novels of the century. It is finally time to be reunited with Anna, Maria, Manolis and Andreas in the weeks leading up to the evacuation of the island ... and beyond. Discover for yourself why ten million readers worldwide love the novels of Victoria Hislop ... 2020 marks 15 years since the first publication of The Island. After spending 25 weeks in the Sunday Times Top Ten – with eight of those at Number One – it went on to become the 14th biggest selling adult novel of the Noughties and has now sold over 5 million copies worldwide as well as being made into a hugely successful 26-part Greek TV series.
Vores andre websider: