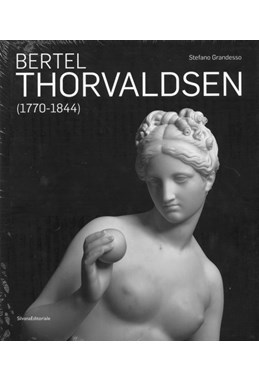 DKK 498.00 inkl. moms
DKK 398.40 ekskl. moms
ISBN:
9788836629350
Sprog:
Engelsk
Indbinding:
Hardback
Sideantal:
304
Forlag:
Silvana Editoriale
Udgivelsesdato:
27-10-2015
Udgivelsesår:
2015
Udgivelsesland:
Italien
BESKRIVELSE:
304 pages, hardback. This volume is dedicated to Bertel Thorvaldsen (1770-1844), a Danish sculptor of international fame during the XIX century. Born in Copenhagen in 1770, he spent more than forty years in Italy, maintaining a large workshop in Rome. When he eventually returned to his native land in 1838 he was more known in Europe than in Denmark. But in the following years it became rather vice versa. Obviously this is connected with the fact that in Copenhagen he could not keep the close contact he had in Rome with the international art community and art market in the cultural capital of Europe. The really strong point of this book is that it precisely links together Thorvaldsen’s art with a broad international, artistic context and thus contributes to a more faceted understanding of his work.
Vores andre websider: