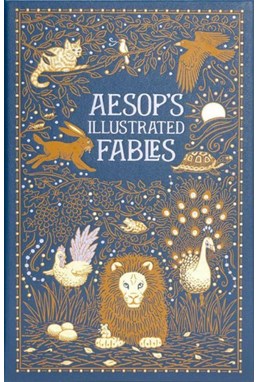 DKK 298.00 inkl. moms
DKK 238.40 ekskl. moms
ISBN:
9781435144835
Sprog:
Engelsk
Indbinding:
Indbundet
Sideantal:
464
Forlag:
Barnes & Noble
Udgivelsesdato:
13-06-2013
Udgivelsesår:
2013
Udgivelsesland:
USA
BESKRIVELSE:
Aesop's Illustrated Fables features more than 400 fables, beautifully illustrated with engravings and color plates by Arthur Rackham, Walter Crane, and Ernest Griset. It includes all of the classic fables whose titles and morals have become part of our common cultural vocabulary, among them "The Boy Who Cried Wolf", "The Tortoise and the Hare", "The City Mouse and the Country Mouse", "The Dog in the Manger", and "The Fox and the Grapes". Part fairy tale, part fantasy story, part parable with a lesson to impart, each of these fables is a polished gem of storytelling craft whose luster never dulls. As legend has it, the storyteller Aesop was a slave who lived in ancient Greece during the sixth century B.C. His memorable, recountable fables have brought amusing characters to life and driven home thought-provoking morals for generations of listeners and modern-day readers. Translated into countless languages and familiar to people around the world, Aesop's fables never tarnish despite being told again and again. Full of humor, insight, and wit, the tales in Aesop's Fables champion the value of hard work and perseverance, compassion for others, and honesty. They are age-old wisdom in a delicious form, for the consumption of adults and children alike. Aesop's Illustrated Fables is one of Barnes & Noble's Collectible Editions classic editions. Each volume features authoritative texts by the world's greatest authors, in an exquisitely designed bonded-leather binding with decorative stained edging and marbled endpapers and an attractive silk-ribbon bookmark.
Vores andre websider: