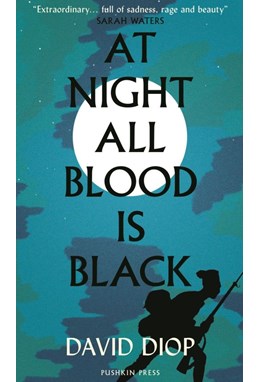 At Night All Blood is Black (PB)

DKK 135.00 inkl. moms
DKK 108.00 ekskl. moms
ISBN:
9781782277538
Sprog:
Engelsk
Indbinding:
Paperback
Sideantal:
160
Forlag:
Pushkin Press
Udgivelsesdato:
06-05-2021
Udgivelsesår:
2021
Udgivelsesland:
Storbritannien
BESKRIVELSE:
THE WINNER OF THE INTERNATIONAL BOOKER PRIZE 2021. Alfa and Mademba are two of the many Senegalese soldiers fighting in the Great War. Together they climb dutifully out of their trenches to attack France's German enemies whenever the whistle blows, until Mademba is wounded, and dies in a shell hole with his belly torn open. Without his more-than-brother, Alfa is alone and lost amidst the savagery of the conflict. He devotes himself to the war, to violence and death, but soon begins to frighten even his own comrades in arms. How far will Alfa go to make amends to his dead friend? At Night All Blood is Black is a hypnotic, heartbreaking rendering of a mind hurtling towards madness. Review: 'An extraordinary novel, full of sadness, rage and beauty' - Sarah Waters 'So incantatory and visceral I don't think I'll ever forget it' - Ali Smith, Guardian 'It is an intense exploration of the dehumanising effect of war and colonialism. This slight book explodes with extraordinary force - readers will not forget it in a hurry' - The Times, Historical Fiction Book of the Month 'More than a century after World War I, a great new African writer is asking these questions in a spare yet extraordinary novel about this bloody stain on human history' - Chigozie Obioma, New York Times Book Review 'An unrelenting take on war, race, masculinity, and colonialism... Diop's short, sharp, and serrated novel is a visceral dramatization of how our humanity and inhumanity are forever intertwined' - Viet Thanh Nguyen, author of The Sympathizer 'A short, powerful novel... Diop presents a world with no firm dividing line between courage and madness, murder and warfare; the most dedicated killers are awarded the Croix de Guerre. Alfa's final transformation, as he attempts to atone for his guilt over the death of his friend, is unexpected, poetic - and chilling' - Spectator
Vores andre websider: