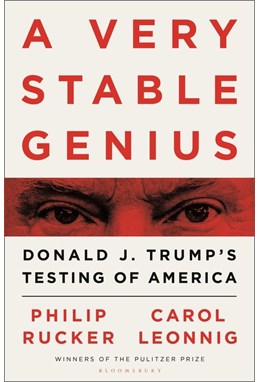 DKK 179.00 inkl. moms
DKK 143.20 ekskl. moms
ISBN:
9781526609083
Sprog:
Engelsk
Indbinding:
Paperback
Sideantal:
336
Forlag:
Bloomsbury Publishing
Udgivelsesdato:
21-01-2020
Udgivelsesår:
2020
Udgivelsesland:
Storbritannien
BESKRIVELSE:
From the winners of the Pulitzer Prize, Washington Post national investigative reporter Carol Leonnig and White House Bureau Chief Philip Rucker, comes shocking new reporting on Donald Trump's unique Presidency and its implications. Rucker and Leonnig have deep and unmatched sources throughout Washington DC, and for the past three years have chronicled in depth the ways President Donald Trump has reinvented the presidency in his own image, shaken foreign alliances and tested American institutions. It would be all too easy to mistake Trump's first term for pure chaos. But Leonnig and Rucker show that in fact there is a pattern and meaning to the daily disorder. Relying on scores of exclusive new interviews with first-hand witnesses and rigorous original reporting, the authors reveal the 45th President up close as he stares down impeachment. They take readers inside Robert Mueller's Russia investigation and the Trump legal team's scramble for survival, behind the curtains as the West Wing scurries to clean up the President's mistakes and into the room to witness Trump's interactions with foreign leaders and members of his Cabinet, and assess the consequences.
Vores andre websider: