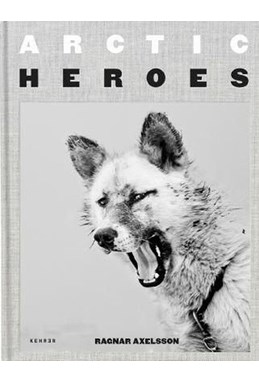 Arctic Heroes: A Tribute to the Sled Dogs of Greenland

DKK 649.00 inkl. moms
DKK 519.20 ekskl. moms
ISBN:
9783969000076
Sprog:
Engelsk
Indbinding:
Indbundet
Sideantal:
300
Forlag:
Kehrer Verlag
Udgivelsesdato:
07-01-2021
Udgivelsesår:
2021
Udgivelsesland:
Tyskland
BESKRIVELSE:
Arctic Heroes takes a poignant look at the fate of the Greenlandic sled dog. In Greenland, where the melting ice sheet is irrevocably disrupting the hunters’ 4,000-year old traditional way of life, the stark reality of global warming is an immediate and direct threat to their everyday survival. The Greenland dog, essential to Inuit settlement and survival, now faces extinction as hunters are forced to adapt to the vanishing world around them. The sled dog population has shrunk from about 30,000 in 2009 to about 12,000 in 2019. In approximately 150 stunning images, and through hunters’ personal stories, retold by the author, this book bears witness to the animals’ magnificence and the deep, integral role they play in the hunters’ lives. The photographs included in this book were taken in Greenland between 1986 and 2020. For over forty years, Icelandic photographer Ragnar Axelsson, also known as RAX (b. 1958), has been photographing the people, animals, and landscape of the most remote regions of the Arctic, including Iceland, Siberia, and Greenland. In stark black-andwhite images, he captures the elemental, human experience of nature at the edge of the liveable world, making visible the extraordinary relationships between the people of the Arctic and their extreme environment – relationships now being altered in profound and complex ways by the unprecedented changes in climate.
Vores andre websider: