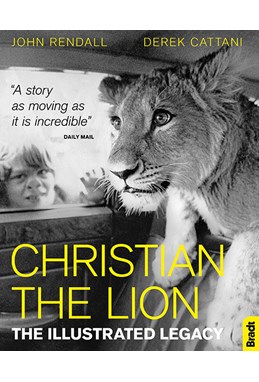 DKK 215.00 inkl. moms
DKK 172.00 ekskl. moms
ISBN:
9781784776213
Sprog:
Engelsk
Indbinding:
Hæftet
Sideantal:
192
Forlag:
Bradt Travel Guides
Udgivelsesdato:
18-10-2018
Udgivelsesår:
2018
Udgivelsesland:
Storbritannien
Serie:
Bradt Travel Guides
BESKRIVELSE:
The story that captured the imagination of the world... In 1969 Harrods department store in London sold a three month old lion cub to two young Australians, John Rendall and Anthony (Ace) Bourke. They called him Christian. For a year Christian lived happily and safely with John and Ace and his human 'pride', initially in the World's End on the King's Road in Chelsea, where Derek Cattani first began photographing him. When Christian outgrew his London environment he was entrusted to the care of George Adamson in Kenya, who with his wife Joy, had successfully rehabilitated their lioness Elsa, the subject of Joy's Book Born Free. A year after Christian had been living in the wild John and Ace returned to Kenya to try and find him. The film clip of their emotional reunion has now been viewed by over 100 million people on YouTube. In 1973 Christian disappeared into the wild forever. George Adamson had uniquely rehabilitated a 5th generation zoo-bred lion. John and Ace's first book about Christian was a million seller in the 1970s, and enjoyed a huge resurgence of interest after their YouTube clip went viral in 2006. This brand new book from Bradt, collects Derek Cattani's never-before-seen pictures of Christian and updates the story to the present day, including the story of their YouTube sensation and a chapter on the murder of George Adamson. When John and Ace took Christian to Kenya in 1970 there were an estimated 300,00 lions in Africa. Today there are fewer than 25,000.
Vores andre websider: