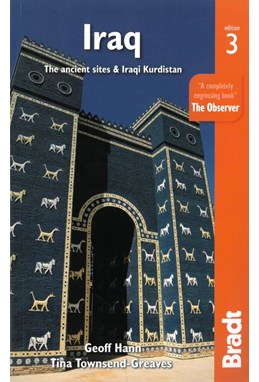 DKK 275.00 inkl. moms
DKK 220.00 ekskl. moms
ISBN:
9781784774745
Sprog:
Engelsk
Indbinding:
Hæftet
Sideantal:
430
Forlag:
Bradt Travel Guides
Udgivelsesdato:
20-12-2021
Udgivelsesår:
2021
Udgivelsesland:
Storbritannien
Serie:
Bradt Travel Guides
BESKRIVELSE:
This thoroughly updated third edition of Bradt's Iraq remains the only dedicated guide to this ancient land. Up-to-date travel information is included, plus all the necessary safety details. Ideal for both armchair and in-destination travel, it covers history, archaeology and culture, including iconic sites such as Babylon and Ur, the stunning architecture of the country's mosques, the natural beauty and wildlife of the Marshes and beautiful Iraqi handicrafts. New for this edition are more archaeological sites in the south, including Telloh and Charax Sparinou, Alexander the Great's port city. Muslim sites and festivals are covered, as is the influence of Shia Islam and the geo-politics of the region. The modern development of Iraq is starting to look exciting and after years in which ancient sites have suffered destruction and neglect, archaeologists are now breaking new grounds and making new discoveries. Iraq's rich and inspirational history is easily forgotten in the tragic turmoil of recent years. This is where writing began and where zero was introduced into mathematics. Although parts of the country remain off limits to tourists, there is plenty to see elsewhere, from Kurdistan's capital, Erbil, one of the world's oldest inhabited cities, to the dazzling shrines of Kerbala, Najaf and Kufa, ruins of ancient Mesopotamian cities, sites of recent US military history such as Fallujah, and the grave of Gertrude Bell, who explored, mapped and excavated the world of the Arabs and provided military intelligence for TE Lawrence's military activities. You can visit the Tombs of the Iraqi Royal family and Ctesiphon, the largest free-standing brick archway in the world, see archaeological proof of the great flood, mentioned in the Bible and the Gilgamesh, and discover the treasures of the National Museum of Iraq. The authors bring their considerable knowledge and understanding of Iraq to provide all the practical and background information needed for a successful trip.
Vores andre websider: