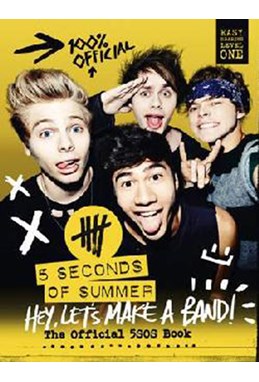 DKK 255.00 inkl. moms
DKK 204.00 ekskl. moms
ISBN:
9780007594894
Sprog:
Engelsk
Indbinding:
Hardback
Sideantal:
288
Forlag:
HarperCollins Publishers
Udgivelsesdato:
09-10-2014
Udgivelsesår:
2014
Udgivelsesland:
Storbritannien
BESKRIVELSE:
This book is pretty much our official story so far. It really does only seem like last week we played our first gig in at the Annandale hotel in Sydney. Since then we've been given the opportunity to turn into the people and musicians we wanted to be. The people who gave us the opportunity were the fans. So this book is like a thank you. We want everyone to know the story of how four western Sydney teenagers picked up their instruments and dreamt of being one of the biggest bands in the world. There's also some embarrassing photos of us dicking around and some facts that some of us didn't even know. So we hope you enjoy it! Love cal, luke, ash and mike x. Review: "We've read the whole thing, cover to cover, 52 times already!" - Shout online "Theirs is an annoyingly interesting story, one for young girls to swoon over, young boys to emulate... and, happily, for parents to approve." - Weekend Sport "A fan-girl's dream" - New! mag "A Christmas must for any 5SOS fan." - Star magazine Biography: 5SOS, as they are affectionately referred to by their ever burgeoning fanbase, first met in the schoolyard in a small town in the Western Suburbs of Sydney, Australia. Luke (18), Mikey (19), Calum (19) and Ash (20) were brought together by a mutual love of pop-punk and the adrenaline-fuelled super-rock of turn of the millennium Americana. They started posting videos on YouTube and within six months had amassed 50,000 Facebook fans, 100,000 Twitter followers and more than 5 million YouTube views. The band re-located to London in September 2012 with one eye on world domination. Fast forward eighteen months and, having spent 2013 and 2014 touring the globe, 5SOS have released their debut album, which immediately reached No.1 globally on iTunes in 71 countries, and topped charts around the world, including the US Billboard chart. With more than 1.5 million albums sold worldwide and total single track sales in the U.S. alone surpassing two million, its been a busy year for 5SOS.
Vores andre websider: