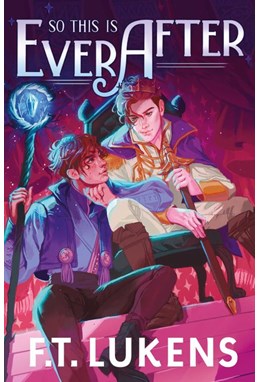 So This Is Ever After (PB) - B-format

DKK 135.00 inkl. moms
DKK 108.00 ekskl. moms
ISBN:
9781398521414
Sprog:
Engelsk
Indbinding:
Paperback
Sideantal:
352
Forlag:
Simon & Schuster
Udgivelsesdato:
22-12-2022
Udgivelsesår:
2022
Udgivelsesland:
Storbritannien
BESKRIVELSE:
Funny, subversive, romantic fantasy from New York Times bestselling author F. T. Lukens! Three months to find your true love, save the kingdom and secure the throne. It's all a breeze from here, right? WRONG! Dive into LGBTQ+ romantic fantasy from New York Times bestselling author F. T. Lukens! Perfect for fans of Rainbow Rowell and Adam Silvera. Arek didn't think about what would happen after he fulfilled the prophecy. He's officially King of Ere, but only Arek and his mage, the devastatingly handsome Matt, know that the role comes with a catch: marry by your eighteenth birthday - or die. Arek's got three months to find his One True Love and save his own life. But things go painfully and hilariously wrong ... until he discovers that love might have been right in front of him all along.
Vores andre websider: