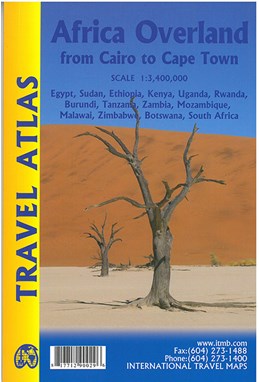 DKK 157.00 inkl. moms
DKK 125.60 ekskl. moms
ISBN:
9781771290029
Sprog:
Engelsk
Indbinding:
Hæftet
Sideantal:
107
Målestok:
1:3.400.000
Forlag:
ITMB publishing
Udgivelsesdato:
31-03-2016
Udgivelsesår:
2016
Udgivelsesland:
Canada
Serie:
International Travel Maps
BESKRIVELSE:
1st edition 2016. There are three possible routes to traverse Africa top to bottom. From the east, the only route is via Egypt and Sudan to Ethiopia and East Africa. The route through Algeria, known as the Hoggar (or Haager) route is next, with the route through Morocco to West Africa third. Traversing Africa is one of the great adventure trips in the world. I did it in 1969/70 in an epic journey that took a year and proved to be one of those fundamental acts shaping ones life. None of the routes are completely safe. That applied in the 1960s and it applies equally now, but life consists of determining acceptable risks and doing ones best not to be hit by a Number 10 bus by liking the wrong way when crossing a London street. This atlas portrays the eastern route from Cairo to Cape Town over a hundred pages of maps. It covers 14 countries and gives advice on particularly sensitive travel areas, such as between Egypt and Sudan. We do not show only one recommended route, as there are alternatives once one reaches Kenya, but all are shown. The great advantage of this book is that it is compact and easy to carry, as well as being as accurate as we could make it.
Vores andre websider: